GERMANTOWN, MD – May 2, 2018 – Progressive Maryland endorsed Bobby Bartlett for state delegate in Maryland’s 39th district Wednesday. Since 1991, Progressive Maryland has fought for social, racial and economic justice throughout the state, and has over 120,000 members.

“Progressive Maryland is, in many ways, my political home,” Bartlett said. “I’ve worked with them on campaigns like the Fight For $15, bail reform, and fair elections. It has been a privilege and a valuable learning experience to be in the trenches with them, and I’m honored to have earned their trust and respect to carry on the good fight from within the legislature.”

Progressive Maryland’s endorsement adds to the momentum building for Bartlett down the campaign’s home stretch. Recent weeks have seen the state AFL-CIO and Montgomery County activists at Progressive Neighbors voice their support for Bartlett in addition to national Democratic groups like Run For Something.

Progressive Maryland has conducted frequent neighborhood canvasses all over the state to build their base and advocate for their candidates. Their contributions will provide an important boost for Bartlett, who has personally knocked over 6,000 doors in the district to introduce his message of new transportation solutions, universal pre-K education, and reforming the Annapolis political machine.

District 39 is in upper Montgomery County and is comprised of parts or all of Germantown, Montgomery Village, Clarksburg, Goshen, North Potomac and Washington Grove. The district is represented by three delegates and one senator, with the three delegate candidates with the most votes winning in both the primary and general elections.

The 2018 primary election for Maryland state offices and local races will be held on June 26, 2018, with early voting open from June 14 until June 21.

More information on Bartlett and his platform can be found at his website, BobbyBartlett.com. 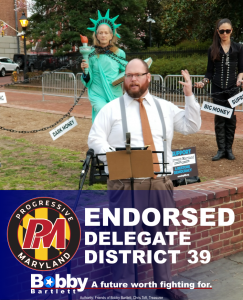